Economic fallout from abortion bans will hit the poor hardest

Abortion bans in the United States will put pressure on economically vulnerable women who are already struggling due to high inflation and recession fears, economists and reproductive policy experts have warned.

Reaction to the United States Supreme Court’s decision to overturn the nearly 50-year-old Roe v. Wade precedent enshrining abortion rights has quickly spread across US states, with each now facing decide how to regulate the procedure – or allow it at all.

Nearly 30 million women between the ages of 15 and 44 live in states that have already banned or are likely to ban abortion statewide since the ruling. About 290,000 legal abortions took place in these states in 2020, according to data from the Centers for Disease Control and Prevention and the Guttmacher Institute.

Many of these states also have the highest poverty rates among women of childbearing age. Nearly a quarter of women ages 15 to 44 in Louisiana and Mississippi, where abortion bans were immediately triggered by Roe’s overthrow, live below the federal poverty level.

The most economically vulnerable women will likely bear the brunt of the fallout from statewide bans, which are expected to exacerbate existing societal inequalities amid the biggest shift in access to abortion care in 50 years. year.

“People who have resources can travel. . .[and]will find out how to order pills online. . . It’s very likely that the wealthiest people will be able to get around their state’s laws and the poor won’t be able to,” said Diana Greene Foster, a demographer and reproductive policy expert at the University of California, San Francisco.

“It’s a group of women who are already poor, who already live on the margins. [They] are very unlikely to have access to paid leave. . . or high-quality child care,” Myers said. “It is reasonable to expect them to suffer and their families to suffer economically as a result.”

Restrictions on abortion providers can affect how women participate in the labor force.

New research prepublished in March by Itay Ravid, a law professor at Villanova University, and Jonathan Zandberg, an economist and lecturer at the Wharton School at the University of Pennsylvania, found that enforcement of laws restricting abortion providers widens the gender pay gap in this state due to women leaving the workforce or choosing lower-paying jobs.

“We find that every time such a law is applied, in the states that apply this law, we see a drop of about 5% in their income, compared to the population of the states that have not applied it. [this] law,” Zandberg said.

States where abortion is or will be banned or severely restricted are likely to feel the most acute effects – but even in states where the procedure remains legal, women coming from states where bans are in effect will exert a additional pressure on providers.

“There is a potential type of abortion tourism in other states that will place a burden on those other states. This can potentially create a situation where providers will not be able to provide the service, and it will become more expensive” , said Ravid.

During a May 10 hearing – days after a draft decision to overturn Roe vs. Wade was leaked – Treasury Secretary Janet Yellen warned members of the US Senate that “eliminating the right of women to make decisions about when and whether to have children would have detrimental effects”. effects on the economy and set women back decades”.

A landmark study — the University of California, San Francisco’s Turnaway Study, which followed more than 1,000 women who had or refused abortions for 10 years — provides insight into what some of the other effects might be. He found that women who are denied abortions are twice as likely to be unemployed and three times more likely to live in poverty compared to those who have had abortions.

The majority of those who sought abortions in the study did so because they could not afford to care for a child.

“A lot of times people want to have kids in the future, they just don’t want the circumstances they’re in right now . . . when they can get an abortion, it’s not uncommon [for them] to have a child later in better circumstances,” said Greene Foster, who developed and led the Turnaway study.

Working with Greene Foster, Sarah Miller, an economist at the University of Michigan, examined the credit reports of women who participated in the Turnaway Study in the years before and after their expected pregnancy.

The research, published in January, found that women refusing an abortion suffered significantly greater financial hardship in the years following pregnancy compared to those who had an abortion, despite similar financial circumstances. Those turned down saw their debt increase by 78% on average, and their credit score was more likely to fall below 600.

The consequences of denying access to abortion also affect the rest of the family.

About 100,000 people will be blocked from accessing abortion care in the first year alone following state bans, representing a 13% reduction in abortions nationwide, according to Myers.

In Montana, Planned Parenthood announced last week that it would not be able to provide medical abortions to people traveling from states where abortion had been banned, as some Republican lawmakers seek to sue residents who cross the border. state borders for an abortion. 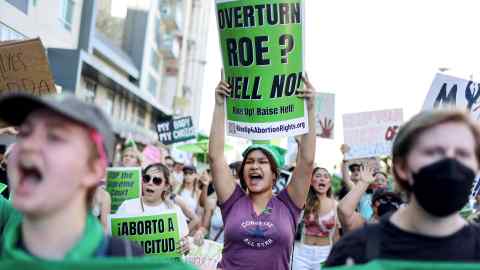 Recognizing the financial burden of child care, some Republican senators, including Marco Rubio and Steve Daines, have proposed plans to financially support women who are forced into having unplanned pregnancies. Yet many of these provisions are funded by existing benefits like Social Security or the Earned Income Tax Credit, the latter overwhelmingly benefiting poor families with some income.

“If a woman lives in Mississippi, the maximum monthly welfare benefit she could get for herself and her two children would be $220 a month, which is just not enough to support a family. If she is already on welfare and has another child, Mississippi has a family cap on its welfare policy,” Myers said.

“This vulnerable group has a very, very frayed net to catch them.”